The Manchester & Leeds Railway was built and opened in sections, so as to start getting an income on capital expended as soon as possible. The first section to be opened was the Manchester to Littleborough, Opened 3rd July 1839. The Normanton to Hebden Bridge section was opened 5th October 1840. In the gap between Littleborough and Hebden Bridge Stagecoaches were used until the Summit Tunnel was eventually opened on 1st March 1841.

On completion of the “Main Line” many schemes were visualised to put branch lines up the many valleys with growing industrial development. One such scheme being the Ryburn Valley which contained numerous Textile mills so plans were duly drawn up but no capital was allocated to this project. 18 years past then the proposal to develop a railway through the valley was re-opened in 1864 by the Lancashire & Yorkshire Railway (the M&LR being renamed L&YR in 1847). Fresh plans were drawn up and by an Act of 5th July 1865 authorisation was grantedto raise £140,000 capital and allowed 5 years for completion.

Acquisition of land progressed slowly and extension of time to 5th July 1872 was granted in 1868. In that year plans were prepared for extending the Ripponden branch to Rishworth as the first stage in the extension to Littleborough. The contractor’s plan shows many track-work differences to that actually constructed. It had been planned to extend the line by tunnel to pass under Blackstone Edge and into Lancashire but it is reported that the construction of the line as built proved to be “a dangerous and expensive enterprise.” The intention of extending the line was the reason for all the works to accommodate double track although the line was run as single track, except for the first few years. The line was fully opened to Rishworth for both goods and passengers on 5th August 1878.

On 28th October 1882 the Railway Times published details of a proposed new railway from Leeds to Liverpool by a route considerably shorter than the L&YR. Probably it was this scheme that stimulated further interest in the extension to Littleborough for a survey was made during the week ending 21st October. This survey showed that the line was to extend from Rishworth station up the valley south of Rishworth moor to a tunnel 4 miles long under Blackstone Edge, emerging near Hollingworth Lake which it skirted to rejoin the main line near Smithy Bridge a mile south of Littleborough, thereby reducing the distance from Sowerby Bridge by about 5 miles. This scheme was never carried out but the threat of its construction was sufficient to stop any further interest by competitors.

Having looked at a 25″ O.S. map of the Milnrow/Ogden Moor area (1891 edition) we decided that had a line been built from Lancashire to connect at Sowerby Bridge in Yorkshire, it could, at less cost, have joined the Oldham Loop at a triangular junction giving two alternate routes into Manchester i.e. via Milnrow and back onto the main line at Rochdale or via New Hey and onto Manchester via Oldham.

We also considered that a station at the south end of the tunnel was desirable and we thought a suitable area for this station would be the hamlet of Ogden, which would have developed at a quick rate with the coming of the railway. Hence Ogden Fold was established.

Ogden Fold is currently in semi-retirement while Club resources are focused on getting Eastwood finished. It’s taking the layout equivalent of an extended holiday in the South of France – it will return at some point refreshed and full of vigor.

The current plan for Ogden is to change the period to 1950/1960, and to slightly change the track plan to double track with a second platform. 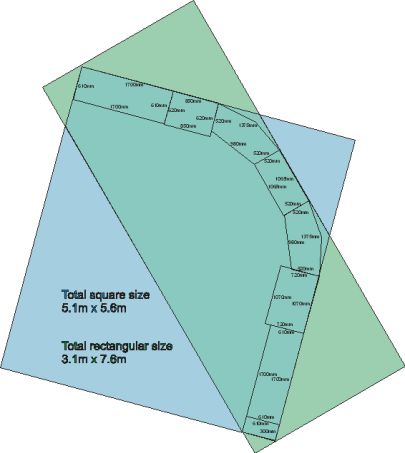 Where to see Ogden Fold