An overview of the layouts at the 2015 Exhibition

What if it Kemp Town had retained some passenger service (this actually ceased in the 1933) and had never been shut (it closed to goods traffic in 1971), been electrified and then had a second tunnel bored to allow direct access to Lewes? This is not a prototypical rendition, the space was not available to do that, but it hopefully gives a flavour of the small space restricted terminus that was Kemp Town.
Look out for the track maintenance vehicles that are a feature of this layout. 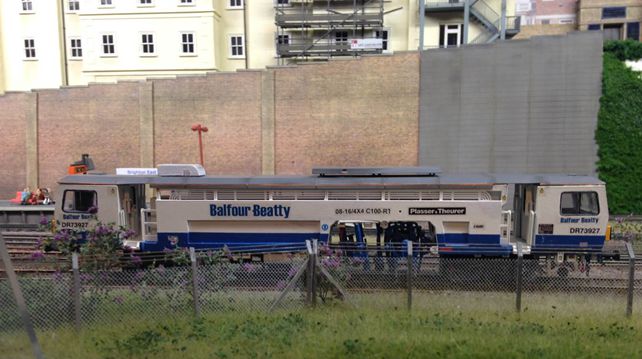 We are delighted to have this pre-grouping Edwardian LNWR layout at our show. London Road was originally built in the 1980s as a four road suburban terminus, representing the LNWR in the Edwardian period. It was one of the earlier P4 (4mm scale, 18.83mm gauge) layouts to appear regularly at many of the major exhibitions. It has now been converted into a though station including carriage sidings and a headshunt to an off stage loco shed  This will provide more operating interest and enable through goods trains to run to add variety.

Many of the locos and carriages are built from London Road Models kits, which came into being to provide models for the layout and has developed into one of the leading producers of etched 4mm kits.

Another of our members, Jonathan presents his new layout. Situated in north- west corner of Wales, on the Llŷn Peninsula, Pwllheli is the northern terminus of the Cambrian Coast Railway. 8 return workings a day traverse the coastal route to Machynlleth with services continuing onward to Shrewsbury.

The layout attempts to convey an impression of the station and its surrounding area as it appeared between 2000 – 2012 prior to European Rail Traffic Management System (ERTMS) coming into operation, with a regular DMU passenger service, interspersed with an occasional heritage rail tour or engineers train.

The 3mm Scale Society are celebrating their 50th anniversary this year, so we thought it appropriate to invite one of our friends to show his 3mm scale layout. Jas Milham is best known for his beautiful and utterly convincing depictions of the 1950s East  Anglian railway scene in ‘S’ scale (think of his iconic Yaxbury Branch). What is possibly less known is that During The 1960’s and 70’s he exhibited a 3mm scale layout known as The Mid-Anglian Line. After his move to ‘S’ Scale, Jas returned to 3mm Finescale in response to the availability of improved products and techniques. Three Mills is the result.

We are proud to present our own Richard Butler’s stunning representation of a GWR terminus serving a busy seaside town in the 1920s (Sun, sea and shingle on Dorset’s Riviera) . Westcliff won (deservedly we think) ‘best layout’ at this year’s 60th anniversary ExpoEM in Bracknell.Click here to read more about Westcliff. 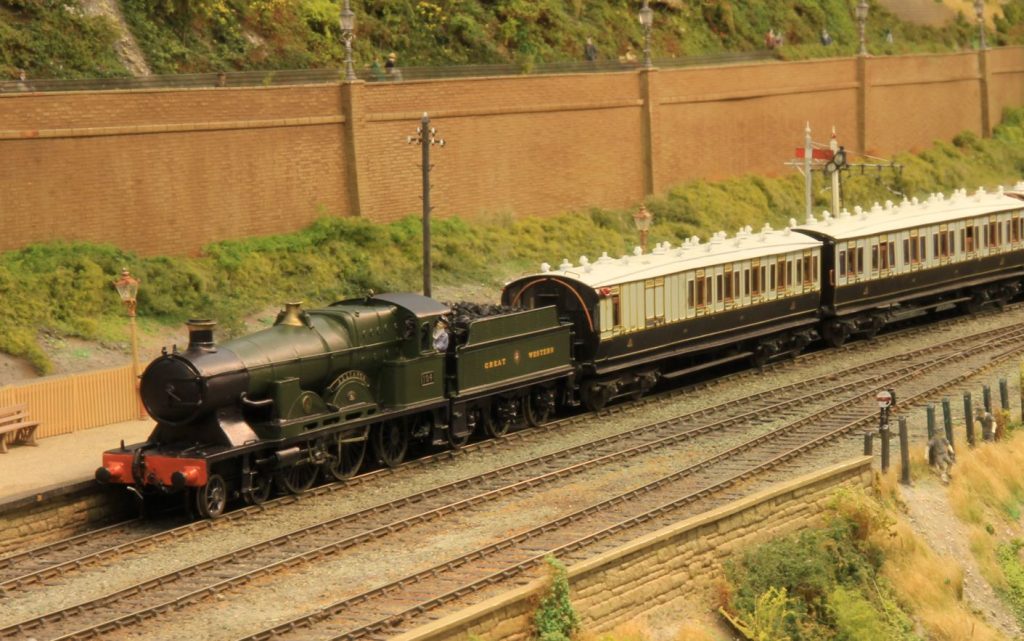 Winterley was a small town served by a canal in a valley surrounded by chalk hills. Local businessmen could see the advantage of a railway connection and persuaded the ‘powers that be’ to build a connection to the main line allowing their business’s to find new outlets.

Space was short and building involved tunnelling through the chalk hillside allowing a small passenger station and goods yard to be constructed.

The model is only eleven feet long and is operated by a 26-lever mechanically interlocked lever frame. Control of the locomotives can be by DCC or DC methods, with interlocking allowing combinations if necessary, as the bay track has its own fiddle yard road. At exhibitions traditional DC control will be used, as the sound effects are normally lost in exhibition halls.

Empire Mills is the Model Railway Club’s first EM gauge layout.  It represents the end of a short freight only branch line, serving a major industrial area.  It has been designed to reflect the very different regional and time period interests of the group.  To this end the layout has two large lift out sections which allow the industry and location of the branch line to be easily changed.

The buildings on the layout are scratch built, and the stock is a mix of converted Ready to Run, kit built and scratch built models, all realistically painted and appropriately weathered.

We welcome Chris and his beautiful evocation of Hemyock Station on the GWR Culm Valley Light Railway which ran for seven and a half miles from Tiverton Junction to Hemyock. The chosen period is circa 1933 following major alterations to the track layout including an additional siding to the creamery. 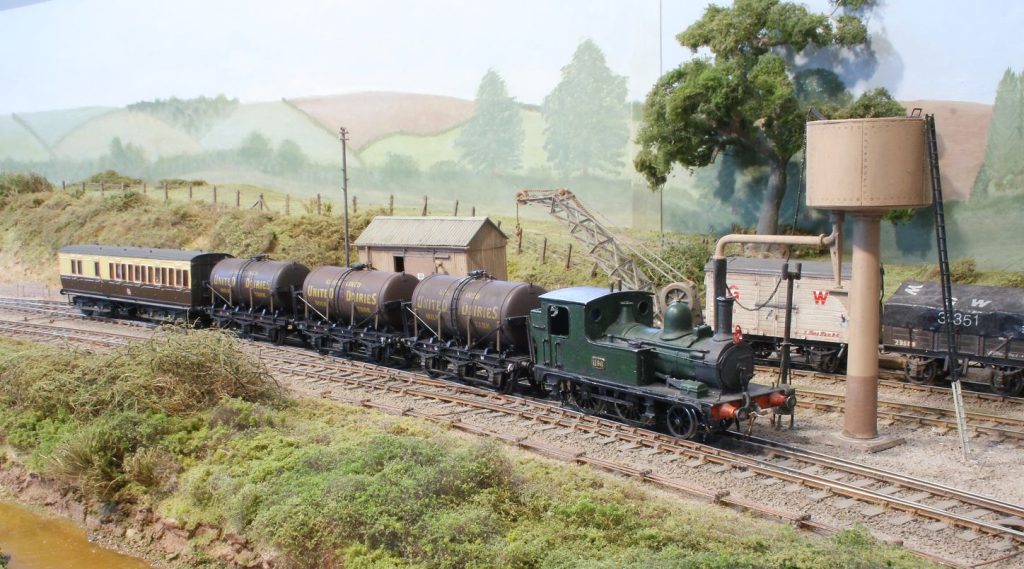 We are pleased to be showing Barry’s new layout ‘Plumpton Green’. The layout won the York Trophy for best layout at Scaleforum 2015. Barry is well known for his involvement with the Mid Sussex Group’s ‘Pulborough’ and ‘Brighton Road’.

In the early 1900’s, Plumpton was a small settlement between Lewes and Ditchling in East Sussex. In 1843 the railway arrived, passing about 2 miles to the north of the village, when the link between Keymer Junction and Lewes was built by the London Brighton and South Coast Railway. A station was eventually constructed in 1863 and Plumpton Race-course was opened in 1886, immediately south of the station.

The model is very closely based on Plumpton as it was in the period 1900-1920. Inevitably some compromises have been made (hence the name ‘Plumpton Green’).

Welton Down is a country junction in the North Downs of Kent on the LC&DR main line from London to Dover via Rochester.  A non-electrified branch leads off to the nearby large country town of Welton, and is now operated by a preservation society, although its main operating base is elsewhere on the line.

Originally built by Bill Rankin as a Southern Railway steam-era layout, the period now modelled is June 1991, just prior to the demise of the air-braked “Speedlink” wagonload freight, serving the train ferry at Dover.

We have had the privilege of showing Jerry’s exquisite  ‘Tucking Mill’ and ‘Highbury Colliery’ in previous years.

The ‘Wharf’ is the latest, and smallest, addition to the series of layouts based on the fictitious North Somerset Light Railway (NSLR) as it might have looked in the 1920s. The name derives from William Smith (1769-1839), one time surveyor to the Somerset Coal Canal (SCC) and father of English geology.

The model, all two feet of it, can be used as an extension to Jerry’sTucking Mill layout or exhibited in its own right. The layout is built to the finescale standards of the 2mm Scale Association. If you have any questions about the layout or 2mm modelling in general then please don’t hesitate to ask.